I have discovered an awesome plugin for wordpress called [wptouch](http://www.bravenewcode.com/wptouch) which is a skin for wordpress which only activates when you read from an iPhone. It makes a much cleaner interface for your blog, I think. Here’s the snapshot from safari;

Somewhere between spell checking and grammar checking is a need for context-specific word checking. I’ve been doing a little writing on the soft keyboard of the iPhone and noticed that while the spell checker is great at correcting mis-spelled words, it is not good at helping you out with words within a certain context. Consider typing this;

Now, that’s a single character incorrect; both words are spelled correctly, but so rarely occur together in English prose that we may suppose there is probably a spelling mistake here. Any mobile provider that gets this right will probably make these keyboards entirely workable. It may not be so relevant on full-sized keyboards, but these smaller keyboards have implicitly more mistakes. Much smaller keys combined with big fat thumbs makes this kind of mistake much more likely. In fact, I’ve done it four times this post;

Awful. I can’t even wrote the list of my mistakes without making the same type of mistakes over and over.

Anyway, I think if this kind of correction could be built into a smartphone editor, it would lead to much faster typing. You would be able to slap in text much faster, not worrying so much about what you really typed, and have the editor figure out from a corpus of English text what you probably meant.

Good lord. I have just discovered that Google’s ‘Google Mobile’ application on the iPhone has voice search. Go to the search page and bring the phone to your ear. The accelerometer tells the app to start listening. Then just speak your search, and away it goes. I’ve done a half-dozen searches and it has been spot on every time.

The future really is with us, my friends. Just to prove it to myself, I held the device up to my mouth and asked it for information on ‘transparent aluminium.’ It worked. I am Scotty, and the idea of accessing the databanks with a mouse and keyboard are starting to seem a little quaint.

The guys over at [Evernote](http://www.evernote.com) recommended the [Griffin Clarifi](http://blog.evernote.com/2008/11/18/evernote-and-griffin-clarifi/) iPhone case because it has a neat little sliding lens that makes the iPhone camera much more suitable for photographing fine detail, like small text. I decided to get one (I hadn’t got a case yet and thought I really should.

It arrived this morning. Here are two photos; one taken without the lens, one with the lens in place. Seems to work, doesn’t it?

**The Lens slid into place**

I just wrote about the problems of note taking on the iPhone and PC. It may not be as difficult as I previously thought. There is a great project called iUI on google code which makes it easy to roll your own iPhone-flavoured website. I got this very basic screen up and running within minutes. I may look into creating an Ajax app using iUI, jQuery, markdown, and WMD 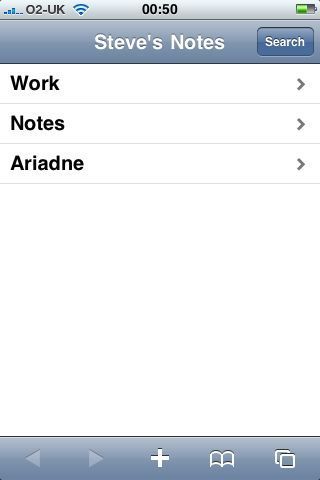 I’ve started to look round at the different options for doing creative writing on the iPhone. The iPhone has a perfectly acceptable software keyboard — not as good as a real keyboard, by a long shot, but acceptable for those moments of time when you’re away from a PC.

I want to be able to write at my laptop in the evening, then switch to the iPhone during a lunch break at work, or while out and about at the weekend.

Turns out there’s a lot of apps out there that are nearly right, but don’t fulfil all my needs. Given the peculiarities of my needs, there will never be an app that covers everything I need done.

– I want live updates. Given that the iPhone has an ever-present internet connection, there’s no reason why my PC shouldn’t be able to push things up onto the internet automatically, and my phone be able to access the up-to-date versions. Turns out there are a few apps out there that do that.
– I’m religious about version control; after every session, I create a backup of my work. I use programmer tools like [Subversion](http://subversion.tigris.org/) for keeping a complete history. Nothing I’ve seen for the iPhone gives you that kind of backup — the ability to, say, examine the same story at thirty different stages of it’s evolution.
– I like to work in plain text. I have lots of little tools that work on plain text files, converting them into [standard manuscript format](http://www.cs.cmu.edu/~mslee/format.html) or running them through [speech synthesisers](http://www.stevecooper.org/2008/09/24/using-speech-synthesis-to-improve-your-writing/). I’d hate to lose the ability to open up a story in a full-fat [text editor](http://www.sublimetext.com) or be forced to use a simplified editor.

There’s a lot of good software out there right now, but as I say, it doesn’t quite meet my needs, and that means I’m hesitant to slap something onto the iPhone rather than keep it on my PC. I don’t want to make a choice about where the master copy of my manuscript lives.

The things I’ve looked at so far;

A nice, very straightforward editor on the iPhone, with a great sync to a web app. Because I can’t get the content out into a text editor, it’s not suitable.

It was a great app on the palm, but it works with .doc files rather than plain text and syncs to your desktop rather than the web, which means it’ll require manual steps to sync up versions before you can switch between phone and PC. Yuk.

Evernote is the strongest contenter, because it has really nice syncing and also works with plain text notes. It doesn’t have the kind of backups I need, and it doesn’t make it easy to get at the raw text of the notes, either. I’d like to be able to select a note and have it open up in my editor of choice, rather than in Evernote’s editor.

I think the best option is for me to write something on top of Evernote. It has it’s own API, so I’m thinking of using that to write two tools; one to download a text note straight into my PC’s text editor, so that I can edit it, and another to save off versions of the notes into a proper version control system. Then use Evernote’s iPhone client to edit on-the-go.

I’ve been thinking about writing a board game after seeing [The Game Crafter](http://www.thegamecrafter.com) and realising the effort of getting a physical game produced might now be relatively low.

The idea is to create a war-themed board game, something to try to simulate small-scale battles — something like Memoir 44. I have an idea for a basic mechanic, where each unit in the game has a standing order: something like a miniature ‘program’ that dictates what the unit does. A little like roborally. So an order might look like this;

> Advance: if there is no enemy within line of sight, move two spaces towards an enemy objective. Otherwise, move towards the nearest unoccupied or allied cover.

So that is the basic mechanic. Each round the players change some of the orders. I’ve got to put together a deck of orders that works sensibly, and a map, and then I can put together a paperprototype and subject someone to a game.

I got my iPhone delivered Saturday morning, and I have been playing with it heavily all weekend. This is a post about my initial impressions of the phone.

Unlike a lot of the people who would have reviewed the iPhone, I’m not a big phone fan. My previous phone was a cheap pay-as-you-go device, and I’ve owned a palm PDA in the past. I’ve owned a couple of iPods, too. So I was expecting something which felt like, well, a phone, a PDA, and an iPod mashed into a single box.

But this is something else. The combination makes it a different class of device from any of its constituent parts. It is quite hard to articulate how it is different, but it certainly is.

It has started to teach me something about application design, for a start.

Take the feeling of things being integrated and automatic. The phone is sold with unlimited web connectivity – 3g and EDGE and wifi – and has gps, and it has a camera. Now, I would expect to be able to take a photo, and then be able to look at a map, and then browse the web a bit. What I wasn’t expecting is apps that write blog posts, take photos, automatically geocode them with information from the gps, and then upload them to my site and inject them into the blog post. That makes it really easy to share stuff you’ve seen.

I never used the camera on my old phone because it was difficult to get the photos off. Once they were off the phone and onto my PC I would have to upload them onto flickr or FTP. Then I would have to get that URL and copy it into the body of the blog post. It was all such a hassle that I never bothered. Now, I can do it right inside the wordpress app that was free on the app store. So I’m going to be doing it a lot more, I think.

Which brings me on to the app store. There are an awful lot of apps available, and they really are very good. I have long experience with palm, and that always had a good community of developers and products, but thos is a level above. The app store seems to make it worth developer’s time to write apps; I suppose because apple deal with the money and the front end (the app store itself) it is easier to get something written. The small number of different phones must make a big difference, too. A friend of mine used to write java apps for phones, and spent a great deal of his time just making sure his app worked on as many of the hundreds of popular phone models out there. Since there are only a handful of different models of iPhone, I imagine that’s a lot easier.

Anyway, enough for now. I am just delighted with this gizmo.

Clare’s birthday meal at Red Chilli went very well. We had ten people, and that meant that we could share. Tried a bunch of different things, had good conversation, then everyone came back to our place and we had cake and wine. Thanks to everyone who attended; it was a great night out.

An interesting site for all my gamer mates; [The Game Crafter](http://www.thegamecrafter.com/home) is a site which lets you design your own card and board games, and package them up for purchase. [Hacker News](http://news.ycombinator.com/) had it linked as ‘CafePress for boardgames.’

Anyway, the barrier to entry has dropped significantly for producing home-baked games.